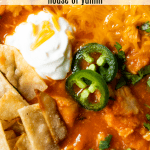 Chicken tortilla soup has become my go to. If I see it on a menu while ordering take out, that’s what I gravitate towards. This tomato based broth is loaded with all my favorite seasonings, veggies, and hearty chunks of chicken. It’s thick and creamy thanks to the addition of corn tortillas and a small amount of cheese. This soup is sure to be a big hit!

How to make Chicken Tortilla Soup:

This soup can be made in the crockpot if that’s an easier method for you. To make this a slow cooker chicken tortilla soup:

You can always use store bought tortilla strips, but since corn tortillas are called for in this soup, it’s just as easy to fry up your own.

If blending the soup in a blender, please use caution. Allow the soup to cool before putting in the blender and sealing the lid. Pressure can build if you blend hot liquids.