This is a sponsored conversation written by me on behalf of Tyson Foods, Inc. As always the opinions and text are all mine.

Chilaquiles Rojos. A traditional Mexican breakfast dish with a few Tex Mex additions.  This dish is bursting with flavor and spice! #tortillalandholiday #recipe 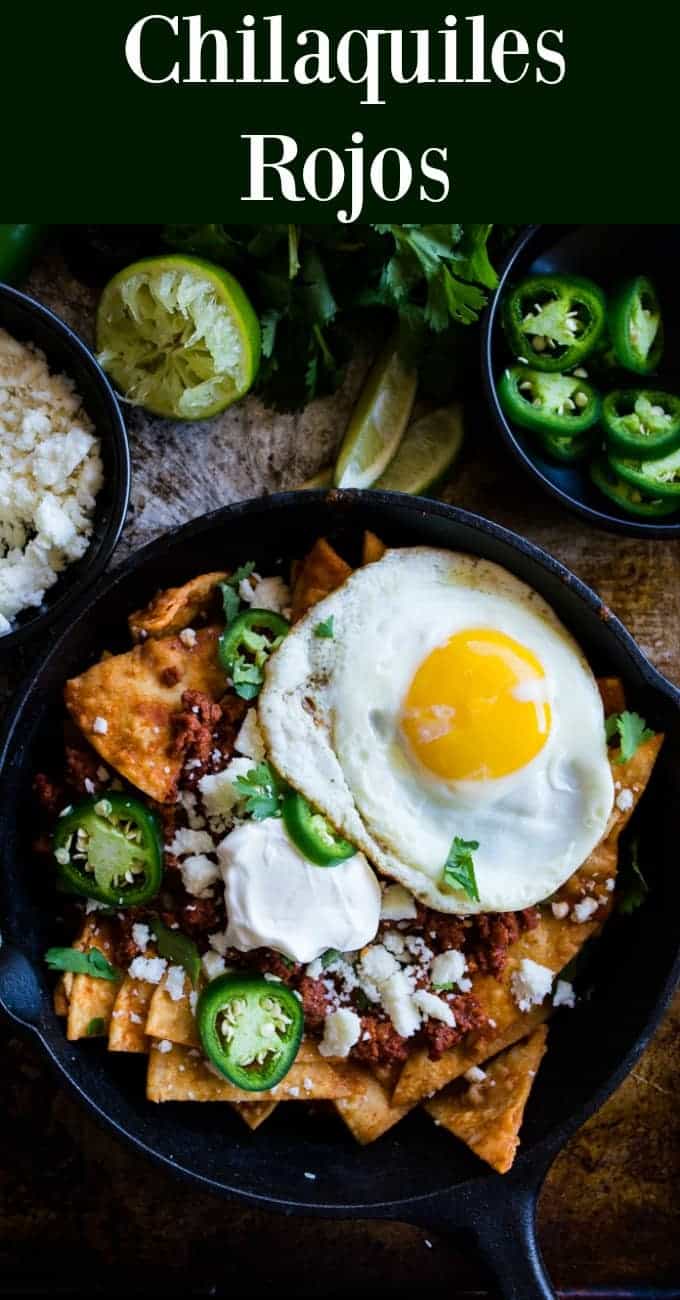 Who’s ready for some breakfast?!  I have a dressed up, slightly easier version of a traditional Mexican breakfast for you today.  Chilaquiles Rojos.  Pronounced Chee-Lah-Kee-Lehs.  If that helps you.. I seriously just sat here saying it 20 times with the hubs to determine the best way to write that out phonetically for you.  Chilaquiles Rojos is basically fried tortilla strips covered with a red sauce.  And of course, I added a few additional toppings.  Which makes my version more Tex Mex than Mexican.  There’s nothing better for the holidays than using dinner leftovers to make breakfast.  Such a time saver!  And that’s exactly what this dish is! 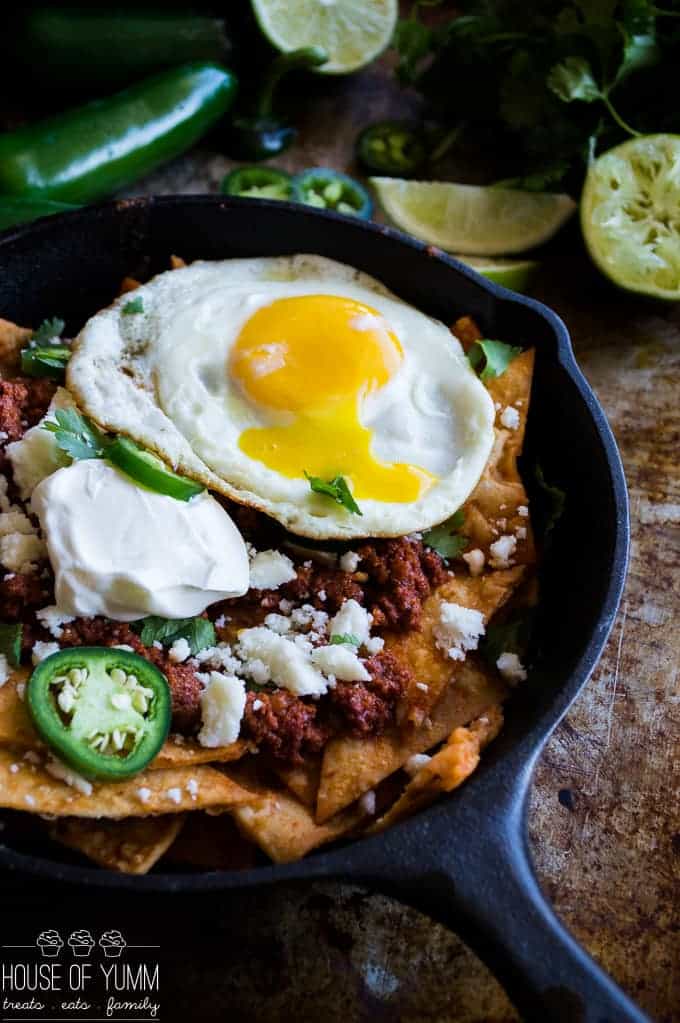 The trick to making Chilaquiles?  The tortillas.  You actually want to use leftover tortillas that are not super fresh.  Typically this dish would be made the day after the tortillas were made.  Meaning we would be making fresh, homemade tortillas.  I love fresh tortillas.  Now do I make my own?  Not really.  BUT!  I have found these amazing TortillaLand tortillas at Costco, they’re kept in the refrigerated section, because they’re not cooked!  They’re pre-made with only 5 ingredients: wheat flour, water, canola oil, salt, and sugar. You can buy either flour or corn.  Since they’re not cooked, then we get to cook them!  So it’s almost like making homemade, fresh tortillas. These tortillas have a great taste and texture.  Just like Gramma makes! Best part, I got them at Costco.  Which means I had plenty on hand to make with our Sweet Barbacoa.  And some left over for the next morning to make these Chilaquiles Rojos.

Ok, so the basics of this dish.  Tortillas.  I went with corn.  Cut into triangles and fried in some oil.  Then soaked in red chile sauce.  I purchased mine, you’re more than welcome to make your own red sauce.  I prefer my chilaquiles slightly crunchy.  So I didn’t cook them in the sauce for too long.  They are supposed to be soft though.  I’m just weird.  Traditionally these are served with some meat, whatever is leftover, queso, and the egg.  Oh the egg. 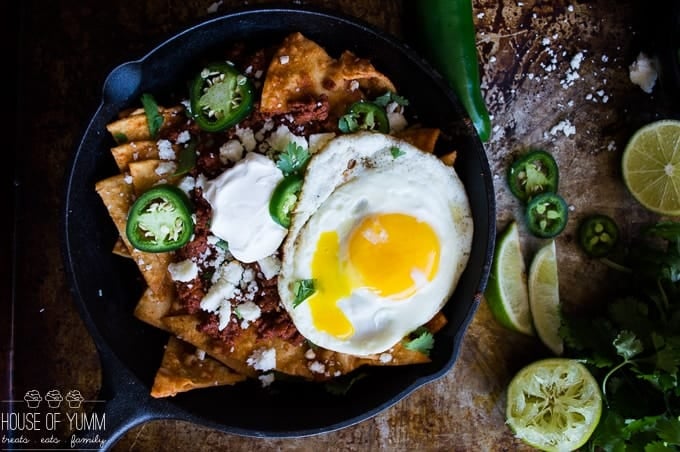 And then I went all out with the toppings on mine.  Some cilantro, jalapeños, sour cream and queso.  You really can add whatever you want to this dish.  Again, traditionally there would be tortillas, red sauce, meat, and queso.  But again, I’m Texan.  So I add a little Southwestern flair to mine. 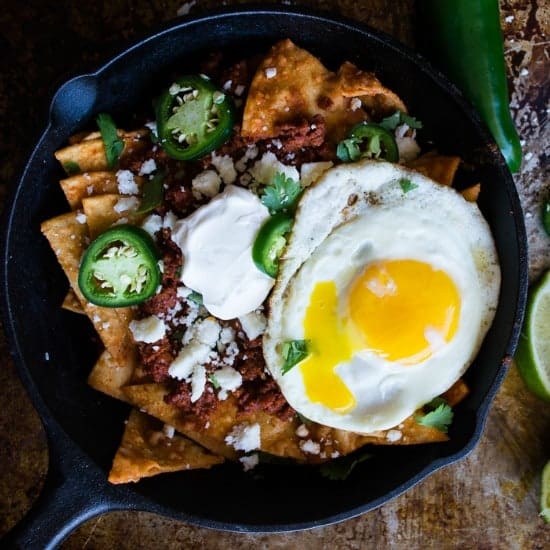 Now I have something fun for you!  I want to know what you would make with these TortillaLand tortillas!  Seriously, the possibilities are endless!  Leave me a comment below telling me what your plans are for these tortillas.  I’ll be picking one reader, randomly, who leaves me a comment telling me what they would make, and you will win a $50 gift card to Costco!  I must have your ideas by Jan 1, 2016 to be considered 🙂

Make sure you check out more info about TortillaLand by going to their site here!  Find these at a Costco near you by checking out tortillafan.com.

Chilaquiles Rojos. A traditional Mexican breakfast dish with a few Tex Mex additions. This dish is bursting with flavor and spice!

LEAVE A COMMENT FOR A CHANCE TO WIN $50 GIFTCARD TO COSTCO!  LET ME KNOW YOUR PLANS FOR YOUR TORTILLALAND TORTILLAS 🙂

ENTRIES NEED TO BE RECEIVED BY MIDNIGHT CST JAN 1, 2016